The construction of this building dates back to the beginning of the 15th century. This historical mausoleum is especially revered among the Kazakhs who live in the capital of Uzbekistan, its environs and in the territory of southern Kazakhstan. According to the legends, the building got its name from the name of the leader from the Kazakh family, his name was Tole-biy. He ruled the Elder Horde in the first half of the 18th century and was nicknamed “Kaldyrgach” by the people, which means “Holy Swallow”, therefore the second name of the building is the mausoleum of Kaldyrgach-Bey. According to legend, the famous Kazakh biy Tole, who lived here, during the period of the conquest of these lands, when all the locals left their homes, refused to leave anywhere. When the soldiers asked him a fair question why he did not run away with everyone else, he replied that the swallow built a nest under the porch of his house, and he could not leave her to certain death. The invaders were very surprised at his courage and left Tole Bi and his family alive.

In the first half of the 20th century, doubts arose among the people that a person of the Muslim faith was buried in the Tole-biy mausoleum without violating the traditional ritual, moreover, according to many, he was not a true admirer of Islam. To verify these rumours, the Kokand city ruler entered the mausoleum at night, having agreed with the watchman of the Ishan Kuli-datkha madrasah (which was located on the territory of the Sheikhantaur cemetery). As a result, they managed to open one of the sagans by the light of flickering candles held by a 12-year-old boy. It was then that a dagger was found under the pillow, which was decorated with gems. This is unacceptable according to Muslim traditions. It was decided to leave the found thing where it was found, and all those involved were strictly forbidden to talk about what had happened.

Decades later, during repairs, a boy who was present when the sagan was opened, now an elderly man, wanted to find a dagger with gems, but did not find it in its original place. Shortly before his death, he told this fact to his son. So this secret was declassified.

In our time, it has not yet been established who exactly is buried inside the mausoleum. But the building itself is recognized as a historical monument of architecture and is carefully guarded by the city. The mausoleum of Kaldyrgach-Bey is especially revered by the Kazakhs who live in the Tashkent region and in the south of Kazakhstan. The building of the Tole Bi mausoleum in Tashkent has a regular rectangular shape with an unusual and eye-catching pyramid-like dome. Researchers say that this form of domes is typical for structures created by local steppe nomads, as it reminds them of their native mountain peaks of the Tien Shan and Alatau massifs. During the existence of the mausoleum, its dome was severely destroyed. It was restored only in the seventies of the XX century. The cruciform hall of the mausoleum consists of four niches, near the corners of which there is an old brick circular staircase and rooms (specialized rooms intended for students). The crypt itself, which has a square shape, is located above the main hall. The foundation of a solid structure was laid at a depth of about one and a half meters and consists of special wooden fasteners, thanks to which the walls of the mausoleum themselves have remained intact to this day. The façade of the structure is practically unlined, only clay stalactites of the 15th century have been preserved near the base of the dome. To date, it has not been possible to preserve the decoration of the building, the decorative design of the territory and the adjacent courtyard. 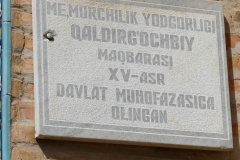 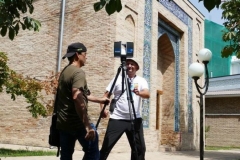 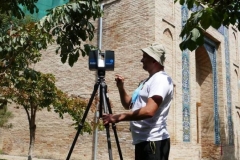 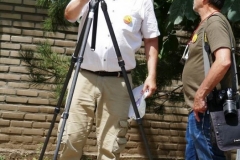 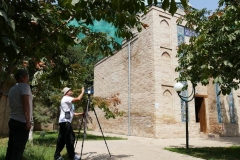 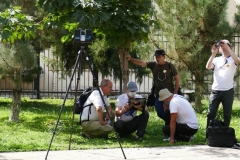 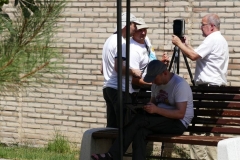 Instruction to run VR panoramas in the mobile application