The Mausoleum of Khawaja Ahmed Yasawi (Kazakh: Қожа Ахмет Яссауи кесенесі (Qoja Ahmet Iassaýı kesenesi)) is a mausoleum in the city of Turkestan, in southern Kazakhstan. The structure was commissioned in 1389 by Timur, who ruled the area as part of the expansive Timurid Empire, to replace a smaller 12th-century mausoleum of the famous Turkic poet and Sufi mystic, Khoja Ahmed Yasawi (1093–1166). However, construction was halted with the death of Timur in 1405. 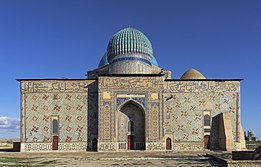